We did it! We biked from DC to Harpers Ferry! 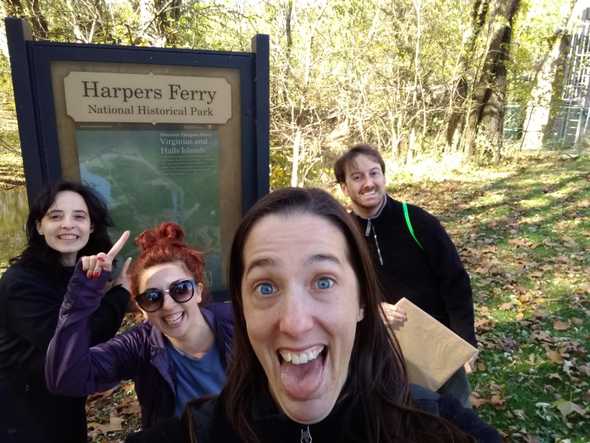 This ride is something that had been on my bucket list for the last few years. I mentioned it to my friend Deb a few months ago, and she was immediately onboard. Furthermore, she quickly recruited our friends Esther and Elaine, picked a date for the trip, and setup travel arrangements. So, I really need to thank her for making this trip happen! 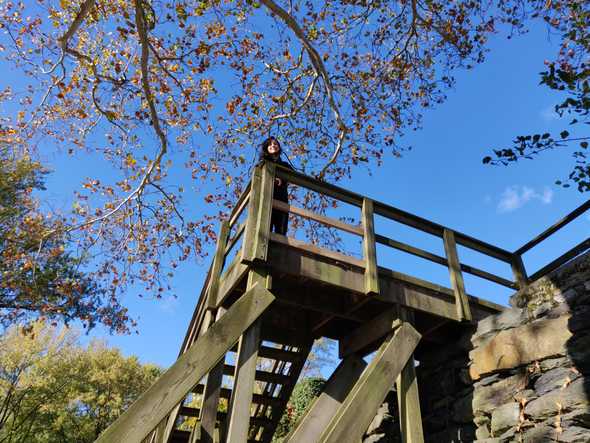 The ride itself was challenging, but it was a lot of fun. Right at the outset, we immediately encountered a few “technical difficulties”. After the first few miles, we discovered that Esther’s tires were under-inflated, thus slowing her down. Unfortunately, the valve on one of her inner tubes was also defective: detaching the pump would somehow “unscrew” the valve, causing the tire to lose all of its pressure almost instantly. So, we had to replace the inner tube.

BUT: removing her tire proved to be nearly impossible! All 4 of us had to work together just to remove the tire from the rim. Afterwards, we had to recruit a 5th person to help us get the tire back onto the rim. We suspected that the new inner tube also got pinched in the process, which might cause it to lose air throughout the remainder of the trip. But, life goes on, and so did we. 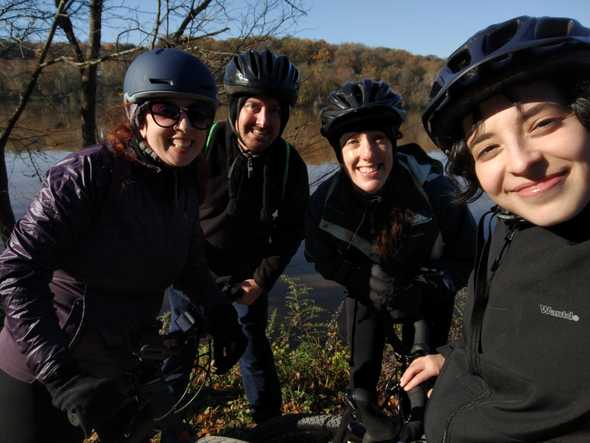 At least, we did for a few more miles. But then, misfortune struck again. We encountered a water fountain that was dangerously over-pressurized, and Elaine nearly lost an eye when trying to get a drink. 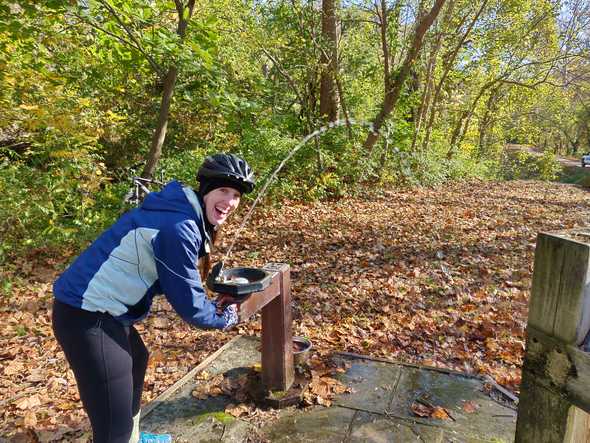 Okay, just kidding about the eye.

But then, misfortune really did strike again! Moments after we continued our journey, we discovered that one of Elaine’s tires had gotten punctured. Since we were already behind schedule, we decided that Deb and Esther would continue onward while Elaine and I repaired the tire. Afterwards, Elaine and I would double our pace to catch back up.

Replacing Elaine’s inner tube proved to be infinitely easier than replacing Esther’s inner tube. Plus, we were able to patch the damaged tube and readjust the brakes. Oh, and then we discovered that one of my tires had a slow leak, so we re-inflated that as well. With everything repaired, we then raced to catch up with Deb and Esther…

… well, mostly. We did stop briefly to take some photos at Great Falls. But, don’t tell Deb or Esther. 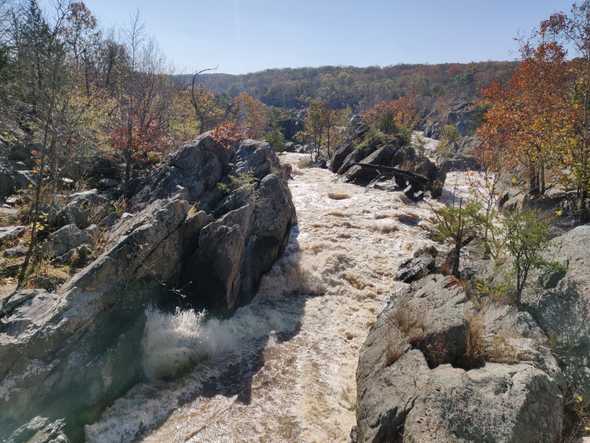 After 45 minutes or so, we managed to catch up with Deb and Esther again. Over lunch, we learned that Esther’s inner tube did indeed acquire a not-so-slow leak due to being pinched. Fortunately, some other cyclists on the trail were able to provide Esther and Deb with a CO2 cartridge to re-inflate the tire. But, we were starting to get a bit concerned that Esther’s bike would not hold up until the end of the trip.

Soon after lunch, our suspicions were confirmed. Esther was already growing exhausted due to riding on an under-inflated tire for so long. To make matters worse, the tire was still losing pressure too quickly. She started lagging behind, so the two of us started traveling at a slower pace. But, it soon became apparent that she was not going to be able to reach Harpers Ferry via the bike path. So, after saying our goodbyes, Esther rode off into the sunset and was never seen again. 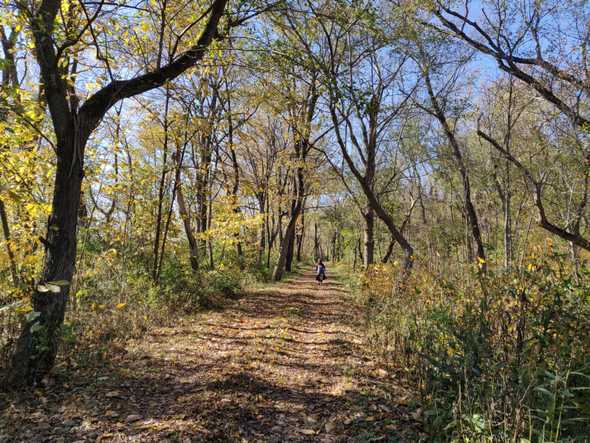 Just kidding. Instead, we all regrouped and looked at the map. It turned out that there were many parking lots and landmarks along the next several miles of the trail. So, Esther decided that she would split off from the rest of the group and continue down the trail at a slower pace. When she was finally exhausted, she would then stop at one of the landmarks and call an Uber to get to Harpers Ferry. So, we all knuckle-bumped and then parted ways. 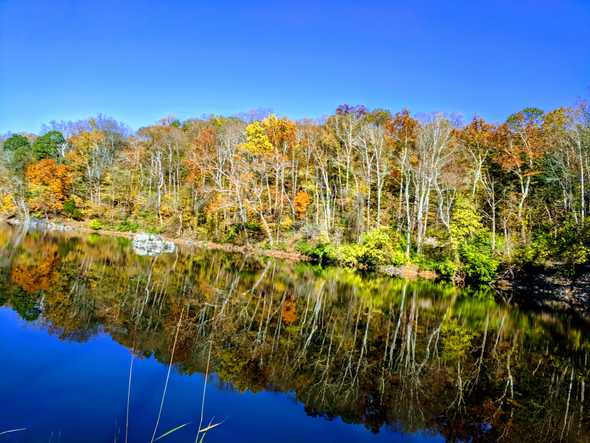 Esther continued biking for another several miles, but eventually reached the point of near-exhaustion at the 33 mile marker. From there, she walked her bike another 2 miles to reach White’s Ferry. 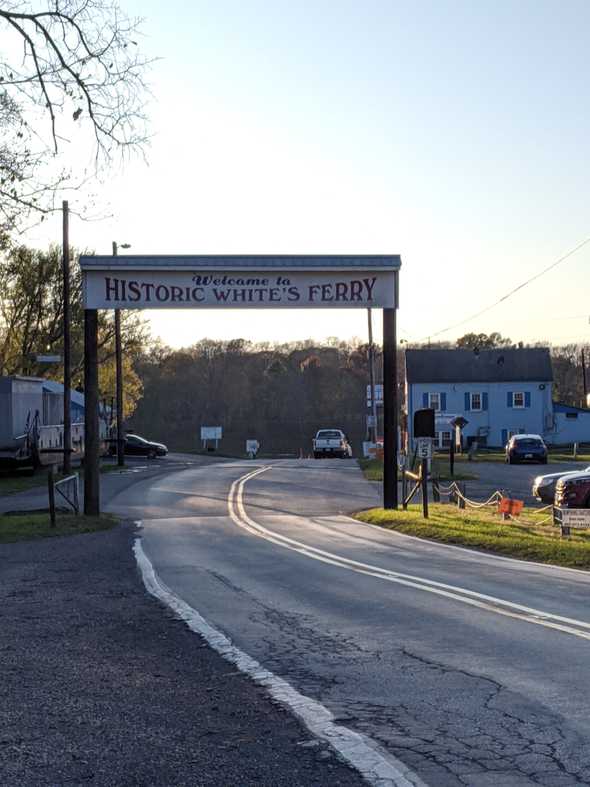 Once she arrived, she discovered that it was incredibly difficult to convince an Uber driver to pick her up at a remote location! She was able to contact a driver before sunset; however, the driver somehow ended up on the wrong side of the river. Fortunately, they were willing to ride the ferry to the other side and pick her up. After a 90 minute car ride, Esther was finally dropped off at the hotel in Harpers Ferry. Upon reaching her room, she sprawled out in bed and waited for life to return to her limbs. 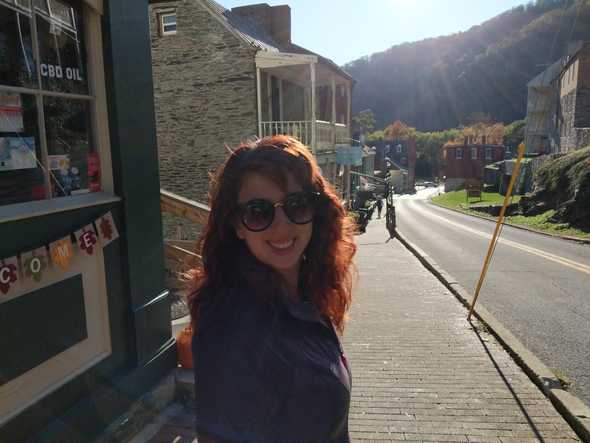 Meanwhile, the rest of us were pedaling in high gear. We were already over 2 hours behind schedule due to all of the delays, and we weren’t as familiar with the trail up ahead. Consequently, we were taken completely by surprise when we stumbled upon The Accursed Trail!

Okay, fine. The trail wasn’t actually “accursed”. It was just “paved” with some kind of super-sandy material. Elaine and I discovered that our bikes would lose almost all of their momentum if we stopped pedaling even for a moment. So, Elaine began blasting battle music from Final Fantasy to re-energize us. Meanwhile, Deb and her miracle bike blazed the trail a few hundred feet ahead of us, seemingly unhindered by this obstacle. Either that, or she was running on pure adrenaline at this point. Sunset was fast approaching, and she realized that she did not have her bike light with her. So, we really wanted to complete the trail before it got dark.

But, the trail had other ideas. For instance, it decided that there needed to be half a dozen downed trees blocking the path. So, it had that arranged especially for us! Each of these downed trees only delayed us by a couple of minutes, but they also required us to lift our heavily-loaded bikes. After providing this upper-body workout, the trail decided that we were ready for a real test of strength. So, it collapsed a bridge and forced us to carry our bikes across a small detour. 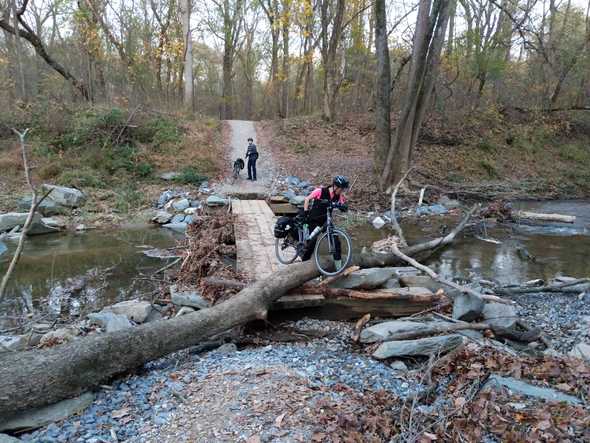 By now, the sun was already setting. Elaine and I activated our bike lights, and we all began riding in a tight formation so that Deb could see as well. This slowed us down a bit, but at least we didn’t have to leave Deb to the wolves!

(Disclaimer: The wolves were added to the story for dramatic effect.)

After pedaling through the darkness for nearly 8 miles, we finally reached the bridge leading into Harpers Ferry: 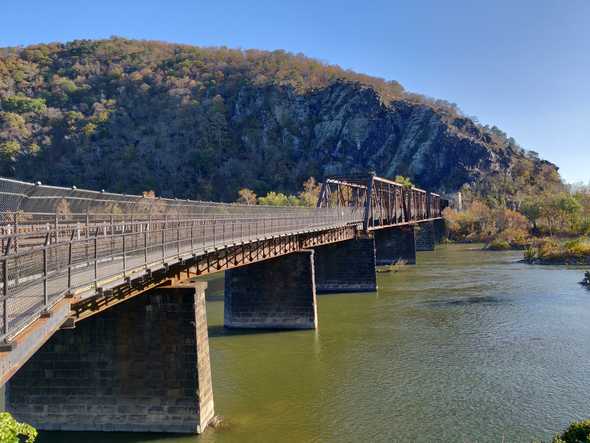 Except, since night had already fallen, it actually looked a bit more like this: 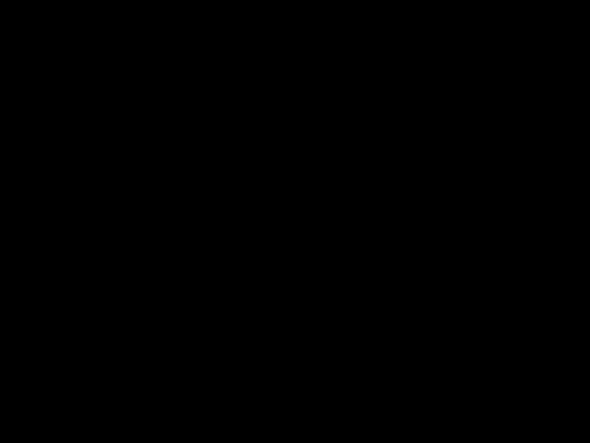 We were nearly at the hotel, but a few more battles against potential energy still awaited us. First, we had to carry our bikes up several dozen stairs so that we could get onto the bridge. Luckily, another traveler helped us carry one of the bikes.

Once we crossed the bridge, we realized that our hotel was at the top of the biggest God-damned hill in the entire world. At least, it seemed that way at the time. Anyway: Elaine’s headlight had already burnt out, so we did not think it would be safe to bike in the street anymore. Plus, we were all very tired, and the sidewalk was not exactly accommodating for bikes. So, we all pushed our bikes up the hill for nearly a mile.

At long last, we finally reached the hotel! After checking in, we regrouped with Esther and decided to reward ourselves with some nice, hot dinners. Unfortunately, the 4-star restaurant we attended did not serve nice, hot dinners. So, we begrudgingly ate some lukewarm dinners instead. We then returned to the hotel and passed out almost immediately. 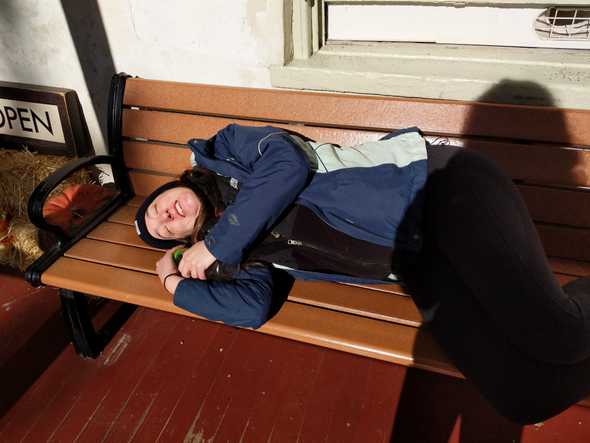 (Note: this was not the hotel. This image was inserted to demonstrate what “sleeping” looks like.)

The next morning, we all managed to wake up around 6:00 AM or so. As luck would have it, Daylight Saving Time had just ended, so we all got a bonus hour of sleep. And, that wasn’t where our luck ended, either. Shortly after breakfast, we received a notification that our train back to DC had been delayed by 2 hours. This meant that we would have plenty of time to explore Harpers Ferry. So, that’s exactly what we did! 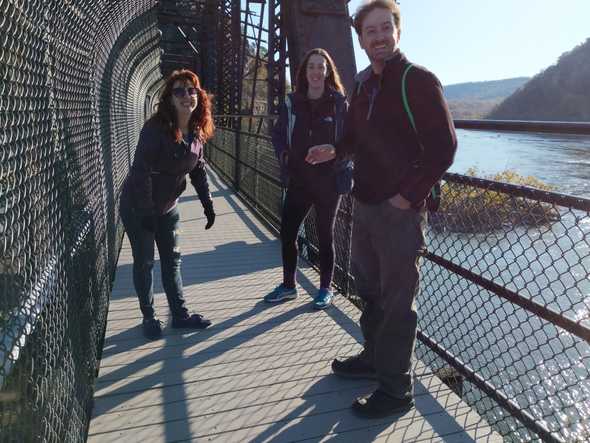 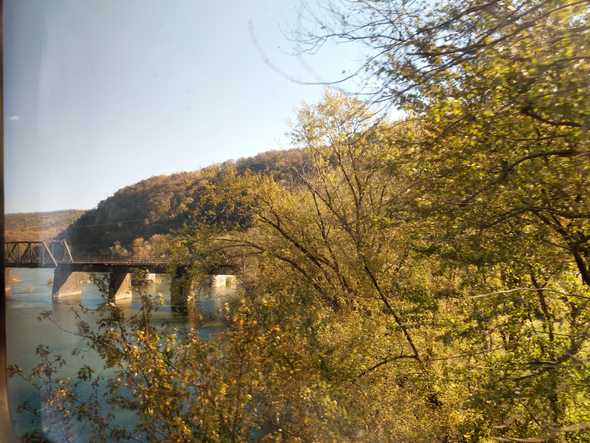 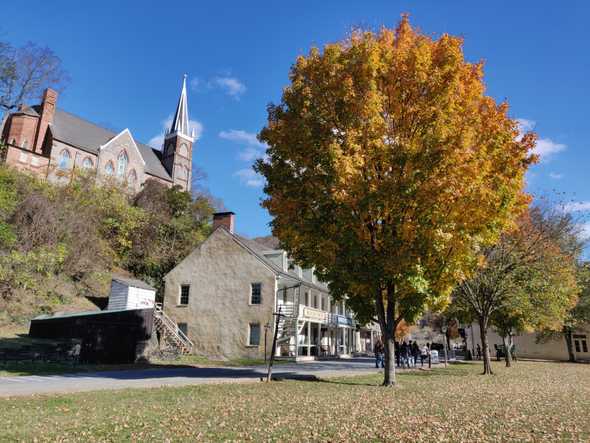 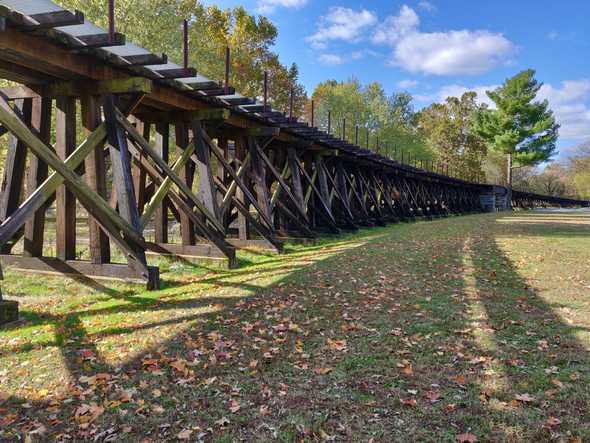 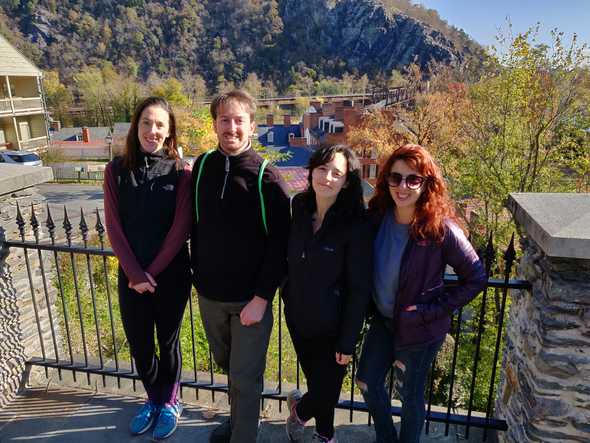 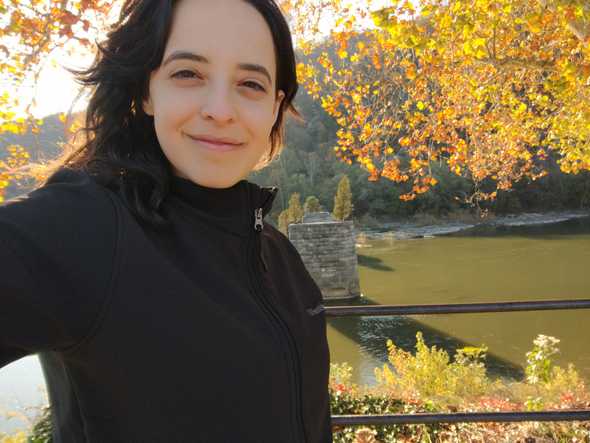 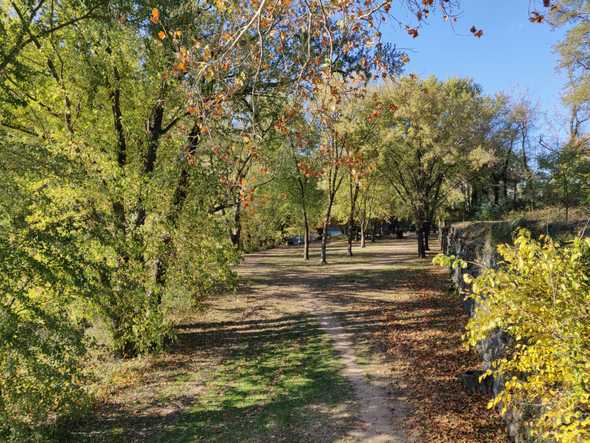 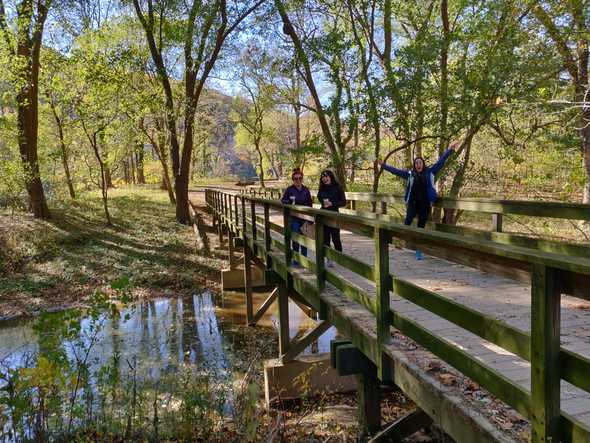 Fire Chief McGrady slammed the door to his car and began walking towards the smoldering remnants. “Was it a kitchen fire?” he asked to no one in particular.

“No, sir,” responded one of the fire fighters. “We think it was a searingly honest Yelp review. Take a look at this:” 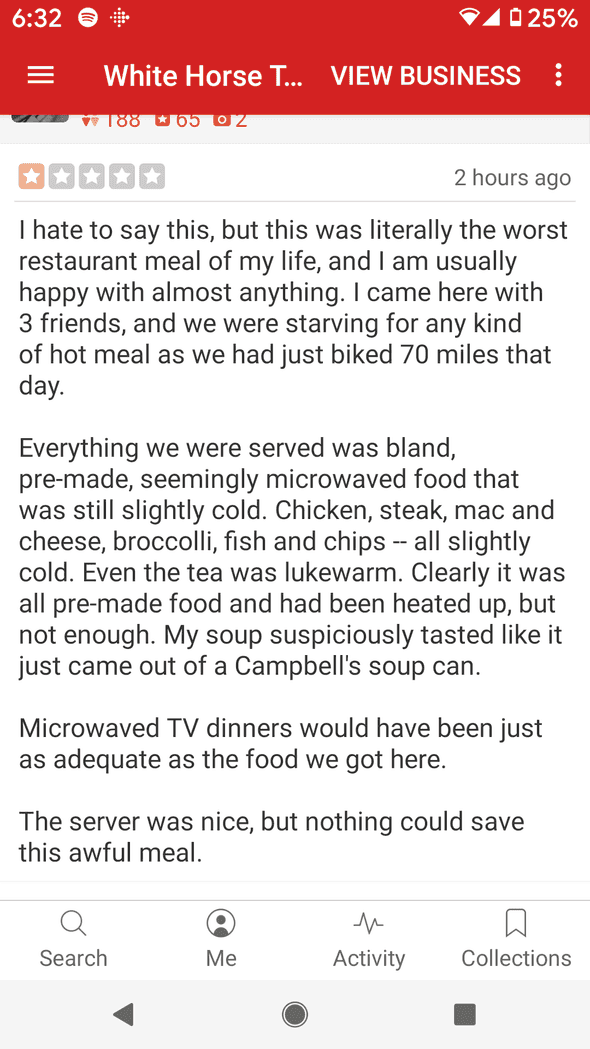 “My God…” muttered the Fire Chief. “Why do we even allow tourists into this town?”